This was our second hui.. we had been to the September one and it had been very rainy and cold.. unusually so apparently. Nevertheless, we had enjoyed it enough to want to come again. I had been sold at the get go.. My husband, Cameron, is normally the one who insists on doing the due diligence and in this case, he needed to do a lot. His reservations were still high when I booked us to come.

We had decided to take two days off prior to the hui to take a slow drive from Auckland down to Gisborne for the night. The sun was shining, and Gisborne looked gorgeous. The next morning, we continued on, stopping for some time on the Mahia Peninsula. Unfortunately, our three year old was having tummy pains.. we thought she was car sick but with hindsight she had a tummy bug. So we ended up just playing at the beach and playground for a few hours. A final stop to soak and splash in Morere Hot Springs before heading to Kotare Village.

I could feel my excitement growing as we turned right into Kotare Road. The river to the left was beautiful in the sunshine.. the car bounced us over the rough gravel road as we headed towards the village. After a short drive, we saw Kotare Village land on the right and then the sign to the Koanga Institute. We were here! Franzi was leaving and waved as she drove past. We drove up to the old, white, wooden house and the kids began excitedly calling to be released from their carseats so they could go as say ‘hi’.

Wow, what a change! We had been here only six weeks previously, and Spring had most definitely arrived! Everything was so much bigger, fuller and greener, bees were buzzing busily everywhere, flowers showing their varied and colourful faces in every direction.  We got out and left the world behind in the car. We were in Kotare now. 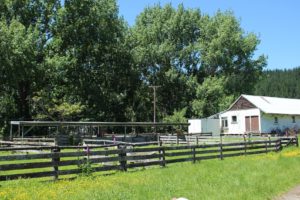 After being warmly greeted, we drove around to the bus to get settled and were immediately grateful for our old 4×4.  The grass was knee high and we could now barely see the road ways. We parked pretty close to the old red housebus and enthusiastically piled out and into our new weekend abode. We had never slept in a bus before, and this was a pretty novel experience. We quickly discovered we had a few residents we weren’t so keen on.. some pretty massive spiders and a friendly cockcroach. After kindly asking them to leave, we got comfortable then headed back over to the Koanga Institute to get ready for dinner.

Ahh dinner… one thing we remembered very fondly from last time.. these Weston A Price style dinners are pretty special. Full of fresh, organic, locally sourced ingredients, the meals are nutrient dense and delicious. On tonight’s menu, we had a lovely kumara Fritatta created by one of the villagers, Renee, with a tasty mixed leaf salad.

Our kids inhaled their meals and disappeared off with their friend. Movies not required, there is just so much nature for the kids to interact with – they don’t need much adult or media guidance to keep them entertained. 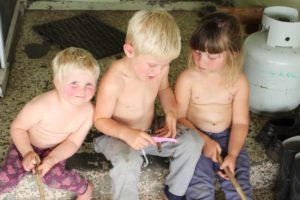 After dinner, we shared our journeys with each other. There were no other kids visiting this time, but as usual, Cameron and I thoroughly enjoyed hearing the stories behind the faces.

Later, after the kids were fast asleep in the big bed in the bus, Cameron and I settled down for a cheeky homebrew cider and conversation.. lit by solar LED lights…something we had not expected.. oh for the little luxuries. J

Waking the next morning after a very crisp night, we got dressed and headed outside…three kids in a housebus does mean you feel the need to get outside fairly quickly! We were grateful we did, as it was a perfectly still, sunny morning. Spring is ten times more beautiful here. It feels as if Spring is embraced for its enthusiasm instead of reprimanded. What to some are weeds and need to be culled and controlled, here have a purpose and just need a little guidance now and then.  The numerous varieties of plants… I won’t even try and pretend I have much knowledge on them- offer so many different views, it feels you could travel the world and still not see as much variety as you can wandering the Kotare property.

There are only a few villagers here this weekend.. many have been called away to tend to other facets of their lives. The village is quiet and peaceful. There are no houses here yet, and to some, it may feel like just a field with a random housetruck or caravan parked here or there. But looking around, the future image grows in my mind. The modest houses sympathetically set amongst thriving gardens, peaceful little lanes passing through the village, children running from house to house visiting one another, the sounds of chickens and ducks sporadically announcing the arrival of an egg or two. A roosters crow. Sheep bleating, cows mooing in the distance. People working in their gardens, popping over for a tea, a small group working collaboratively on a shared part of the village. A gentle hum of natural productivity.  Anyway, I digress…

After a nutritious slow-cooked oats breakfast, and checking on the Urban Garden animals in Koanga, Cameron and I went off for a wander.. being our second hui we had decided to miss the morning discussions in favour of spending more time on the house sites and trying to get a “vibe” off them. I guess I had been pretty much sold on moving here from the get go.. Cameron takes a lot more time to come to a very considered decision. We had been trying to rationalise a section choice, going through pros and cons, asking other villagers how they made their decisions… it seemed the overwhelming majority and just “felt it” so that’s what we were trying to do..however..each site has its own personality, and speaks to different parts of us!

We were off for a walk around the village and surrounding land. We had brought our dog this time and she loved exploring the village with us. Richard has his new puppy, and let the dogs get to know each other whilst we went to explore Kay and Bob’s garden…it always gives me a little buzz going there… seeing how a permaculture garden can function. I love seeing the different plants.. not normally seen in gardens. This time I noticed the Flaxseed (I hope I’ve remembered that right, Kay!) It’s such a delight to see where something you’ve only ever seen in a packet, growing in the ground. Kay and Bob’s garden is like looking at the ultimate graduation certificate.. this is  your goal after 40 plus years of learning in permaculture gardening can get you. What an amazing journey ahead of us! 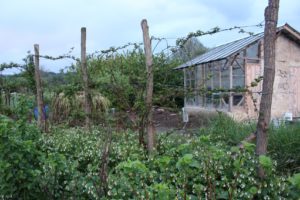 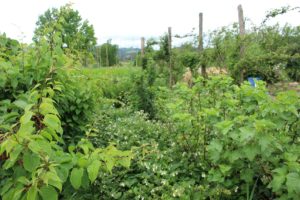 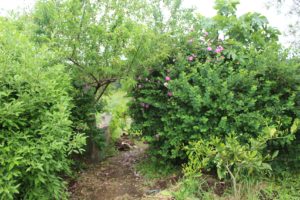 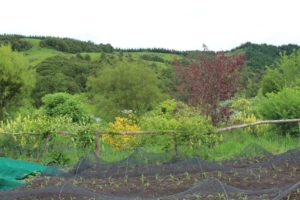 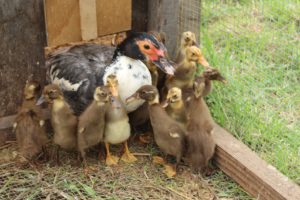 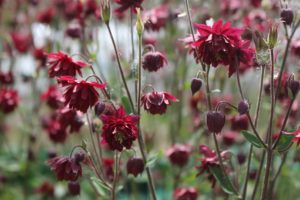 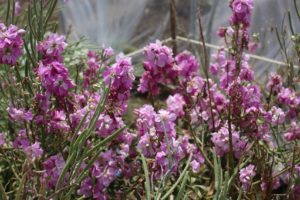 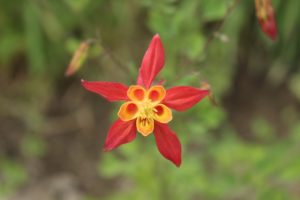 After Kay and Bob’s garden, we headed off over the river.. it was lower this time and much easier to cross. This is our son’s favourite part.. we have to hold hands to cross and its pretty thrilling feeling the cool water rush past our legs and the sharp focus required to as you ensure your feet are stable before taking the next step.

After the river, we were off up the hill. Climbing the hill gives a great view of the village below and the surrounding hills. It’s pretty spectacular. Our journey was cut short as our son had learned a harsh lesson.. sometimes putting your shoes on when Mum and Dad suggest is a good idea.. he had stepped on a thistle and was pretty upset. We separated from the rest of the group and took some quiet family time together and went to visit the hawthorn tree we had first seen at the Spring Equinox hui. It had leaves on it now and looked very serene in its little clearing. We wandered back over the river and after a wholesome soup for lunch, continued with our discussions. Cameron had to retreat to the bus for a bit with a caffeine headache and I’ll admit my head wasn’t feeling great… ironic as we were in the midst of discussing Kay’s philosophy around nutrient dense food!

The discussions were interesting and I think I learned a little more than last time.. half of the joy of doing more than one hui when you have small children is that you get the opportunity to take in more each time.. It’s unlikely the children will distract you at exactly the same spot each time! J

Dinner was my husband’s favourite. He does go to the odd “posh dinner” with his work back Auckland but he declared the food at Koanga much more delicious than a Cibo or French Café meal! It goes to show that expensive food does not equal the best by any means.

On Sunday, we had the working bee. It was another spectacular, warm still day and Taimai had borrowed a tractor and was clearing the ditch were the fibre optical cable was, and the rest of the villagers were digging out the ditch more and laying the orange warning tape down before filling it back again. I’ll confess I had the easy option of looking after children and providing water to the settlers and prospects who were sweltering in the hot sun. It was hard physical labour and that could be seen on every person’s face. Kay brought out some more water and some snack peanut butter bliss balls for morning tea and to keep the energy levels up. 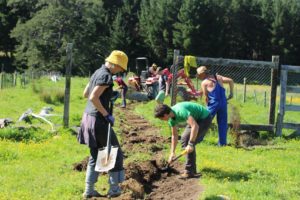 After the working bee, we went for another walk around our favourite sections .. and finally decided which one!

As we got back in our car to leave, I switched on my phone for the first time the entire weekend. It was wonderful to be totally present in the moment for the entire weekend. Unfortunately I was reminded that the world goes on around us, as I had a message telling me my Nana had passed away on the Friday afternoon. I came back to the outside world with a thud.

Sad news aside, we are now in full moving mode. I can honestly say that we are full of an array of emotions.. primarily happiness and excitement.. and tinged with nerves and a little fear of the unknown. I feel a little like my ancestors would have felt coming out from Europe four generations ago. Pioneering and living simply is in my blood.. it feels good to be embracing some of those old ways again, however hard they may be.

See you in the Village sometime!