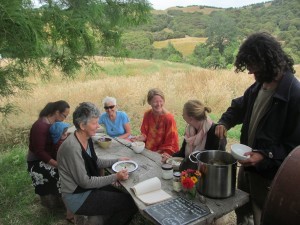 I decided it would work best for me who makes the soup to have a committed group signed up before I started boiling bones so that I didn’t end up with too much and waste all the good food that goes into the pot. So each week I ask for hands up who will be eating under the swamp cypress on the village green for the following week and so far the numbers have gone from 4 to 10 with a few extras who come and go and are easily accommodated by the committed group who are there every day. For me it’s not so much about making a bit of pocket money, but more it has filled a hole from where we were for some time making lunches on a roster, cooking for the whole group each week. The time eating together has been missed since our group got too big to co-ordinate on a weekly roster. For some the idea of cooking for 10- 20 people was a bit daunting as well and this made the original shared lunch design to hard to continue. Since bone broth is an important and nutritious part of our family mealtimes I decided to extend it to the village.

So far it has been really great to have a time where we can all sit together and share a meal on a daily basis. This is so nourishing on many levels and it is creating and building more connections within our new group; allowing time for relaxing under the tree instead of stressing about taking time from our seemingly busy days to ensure we each make a healthful lunch.