A while ago I decided to have ducks in my forest garden instead of chickens.  My research seemed to show they were less hassle than chooks with fewer ailments and no wing clipping needed.  I got five Indian Runners, three ducks and two drakes.  Indian Runners don’t fly, but they do flap their wings really hard and can kind of run up fences a bit.  The naughty one, Matilda, can just clear the 55cm high fencing, so now I have put a rope above the fence.  Rather than giving up, she spends her days pacing up and down the perimeter pondering how to overcome life’s challenges.  Next time I don’t think I would fence with wind netting on wires, unless it was higher.  Maybe a coarse wire netting would be better. 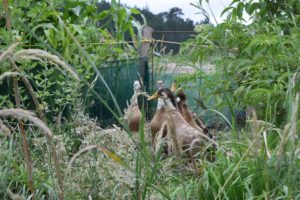 I feed the ducks organic maize that has been fermented for a couple of weeks, which increases the nutritional value for them. I ferment the maize in buckets by adding water and then place it in a Chookateria – which is a feeder unit with a lid on to keep other birds and rodents out. The ducks learn to stand on the step to open the lid and have a feed. It’s a bit of a hit and miss process as they have big feet and the lid goes up and down as they figure it out. When one of them gets their feet in the right place they all dive in for a feed. I add minerals to their feed to make sure they get everything they need.

The ducks eat a lot of grass so do a good job cleaning up around my trees. They dig in the soil all the time with their bills to get bugs, and leave these drill holes everywhere. They love slugs and snails, but seem to turn up their noses at slaters. I’m not sure if the slaters move too fast, or if the ducks just can’t see them, they sure don’t have good eyesight.

I have built duck houses, both for the weather and for laying. They laid in them for a while, but never go inside for bad weather, even in the middle of winter when it is raining and freezing cold. They just camp out, often right out in the open, and snuggle down in the grass.

Ducks can be quite clever at hiding their eggs, and they watch me very closely if I am anywhere near their nest. This behaviour is helpful if I am looking for a nest, as watching their behaviour tells me if I am getting “warmer”.  I don’t take any eggs while I am being watched or they just lay in another spot, and then I have to go hunting.  Fake eggs are good to place in the nest; I just hope they can’t count!

At the moment they have stopped laying altogether!  One issue is that they are going clucky and have stopped laying to sit on the eggs and incubate them.  I moved them on from this but the laying problems continued.  Another suggestion was that they were being over-fed, so now they are on measured rations.  Last night I read that they should be feed no more than 60 – 80% corn in hot weather (no reason given), so I will try and find another feed. Too much mating behaviour also halts egg production so I want to sell one of the drakes.

I have found ducks easy to look after and nice to have around.  I’ll be happy once they start laying again!  I do need to be vigilant with fence maintenance as I don’t like their big feet and digging in my vege garden!